This site refreshes every 15 minutes, so the listings are always live, fresh, and current from all SC major market MLS boards with the newest properties

SC Flooding information. South Carolina in the last 20 years has seen increased flooding due to not only storm ocean surge, but torrential amounts of rainfall, endured by the Midlands of South Carolina in Columbia. As well as the coast in Charleston SC known as the “Low Country”, which really is 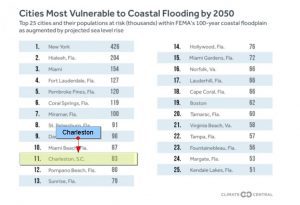 no surprise given Charleston, Myrtle Beach, and Hilton Head’s high risk of hurricane activity. In 2016 the coast of SC took a huge hit from hurricane Matthew doing $100s of Millions in damage, and in 2017 Hurricane Sandy wreaked havoc on the northeastern coast of the United States with Sandy over an estimated $Billion. In 2018 hurricane Harvey decimated Houston TX as they had never seen from storm surge.

Recently FEMA changed the flood maps to a more accurate and current reflection of what is happening with climate change and flood levels. If you’re concerned about how your house may fare in the next storm input your address below so you can make sure you have adequate flood insurance. There are eligibility restrictions to qualify for National Flood Insurance. Please contact the NFIP with eligibility questions at (800) 427-4661 or visit FEMA website.   As FEMA improves its mapping technology and draws more accurate flood maps, some homes may now be located in a flood zone, or higher risk area, where flood insurance is more expensive. Also, some insurance agents may adjust rates to correct previous mistakes made about the home’s features when they are re-evaluating a policy at renewal.

If you know someone who has been negatively affected by flooding Visit The Salvation Army..

With Risk Rating 2.0, FEMA now has the capability and tools to address rating disparities by incorporating more flood risk variables. These include flood frequency, multiple flood types—river overflow, storm surge, coastal erosion, and heavy rainfall—and distance to a water source along with property characteristics such as elevation and the cost to rebuild. New policies beginning Oct. 1, 2021, will be subject to the new rating methodology. Also beginning Oct. 1, existing policyholders eligible for renewal will be able to take advantage of immediate decreases in their premiums.

All remaining policies renewing on or after April 1, 2022, will be subject to the new rating methodology.

Use the risk zone map below to assess what risk your home may have over the next 50 years if sea levels continue to rise at the same level they are currently. This map is based on computer model algorithms that have many variables, guesstimates, and evidence to calculate the data it renders. So, what about rising sea levels due to climate change? The rise in the climate even incrementally can have significant impacts on the weather as evidenced by severe hurricanes, tornadoes, excessive rainfall, and the like. Its actual cause is still up for debate by so-called “experts”, or basically those who research and read for a living. That said, there is no denying all of us would be prudent to be careful and watch what happens over the next 40 years or so with not only the weather but storm surge and rising sea levels.

A huge example of changing, sea currents and rising sea levels can be seen right here on Isle of Palms SC at Ocean Club Villas in Wild Dunes. They have had a terrible time keeping beach erosion from all but forcing them to condemn the luxury oceanfront condos. If not for the state of SC giving the city of Isle of Palms millions of dollars every few years for beach re-nourishment the building would have had to be condemned as waves were already beginning to encroach under the building.