This site refreshes every 15 minutes, so the listings are always live, fresh, and current from all SC major market MLS boards with the newest properties

As a real estate professional, it is my job to protect my clients’ investment(s), not just with negotiations and contracts, but also

with the quality of the property’s construction. So in doing so I have compiled some of the most common residential home construction products and defects are known to experienced real estate professionals. I am not suggesting that “newby” agents can’t be good at their job, but it takes either years of experience or a really focused new real estate agent who has done their research to know these sorts of things. Even if you hire a new agent, luckily there is a home inspection (one must always get) especially with homes over 10 yrs of age. ALWAYS request a seller’s disclosure, because if the seller knows of any problems or potential future problems, or defects, by law they have to disclose them. If they do not and later it is found out (through lawsuit) that they had knowledge of it and covered it up, you could potentially have a successful lawsuit to recover damages.

According to the National Home Inspectors Assoc. – Polybutylene (PB) was a plastic manufactured between 1978 and mid-1995 for use as piping in home plumbing systems. It was inexpensive and offered plenty of advantages over other materials, such as flexibility, ease of installation, resistance to freezing. Pipes made from polybutylene were installed in up to 10 million homes in the Unites States during that period. Despite its strengths, production was ceased in mid-1996 after scores of allegations surfaced claiming that polybutylene pipes were rupturing and causing property damage. In the homes that still contain this material, homeowners must either pay to have the pipes replaced or risk a potentially expensive plumbing failure.

EIFS became very popular in the 1980’s – the mid-1990s and experienced a significant number of serious failures, almost all related to rain penetration. Early EIFS used a face-sealed approach. Face-sealed exterior insulation and finishing systems (EIFS) are inherently defective and unfit for use as an exterior cladding system where moisture-sensitive components are used without a provision for drainage or in locations and assemblies without adequate drying. Most EIFS of the past were face-sealed systems that by definition had no provision for drainage. The typical system also contains moisture-sensitive materials. Specifically, the following moisture-sensitive components are used:  exterior gypsum board, oriented strand board (OSB) or plywood sheathing, metal or wood studs, fiberglass cavity insulation, and interior gypsum board sheathing which will rot and invite termites especially in the Southeastern U.S.

Pressure-treated lumber is used in almost every exterior construction project which is usually for decks, porches, playsets, and pergaloas, etc. Unfortunately, most DIYers, inexperienced but good carpenters and/or cheap contractors don’t know the proper methods and materials to use. Lumber mills and distributors take tree lumber, soak it in chemicals, and subject it to high pressure to essentially inject the lumber with harsh enough chemicals to stop or significantly slow down the effects of termites, water rot, and fungi from moisture/water. Exposure to moisture is almost inevitable. The chemical brews these lumber companies use have changed throughout the decades to come up with the best recipe, but there are unintended consequences homeowners need to be aware of. 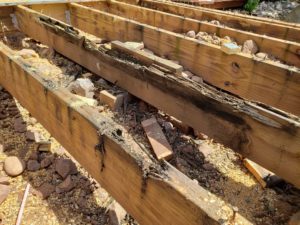 These chemicals cause corrosion on the metal fasteners, screws, and nails used to build exterior/outdoor projects. So it’s imperative you or your agent know what to look for, just in case your home inspector misses something. Simply put, ACQ-treated lumber is extremely corrosive to metal fasteners such as nails, screws, deck joist hangers, etc. Decks can and have collapsed, so check closely if you see the screws or nails in your porches, or the porches and deck boards are rusted and crumbling apart. The first signs of trouble show up as rapid staining of the wood surrounding these fasteners, often within just a few weeks of construction. And definitely within a few years, the choice of inappropriate fasteners will cause premature deck failure as nails and screws are reduced to crumbly iron oxide.

If you’re going to build with pressure-treated lumber you absolutely MUST make sure you use these fasteners listed below:

Solutions are, obviously use only stainless screws, AND/or use synthetic decking.

Following WW2 drywall or sheetrock as many know it became the norm as it is today. However, at that time sheetrock also contained asbestos as did the joint compound used to cover the seams and this continued all the way through to the 1980s when asbestos was found to be harmful. It is a good idea for your agent to do a due diligence procedure and have you spend the money to check if your drywall and/or ceiling popcorn contains asbestos. It isn’t all bad news though because unless you are thinking about tearing off any drywall, removing walls etc it will pose no harm. Only if you drill into the wall, cut into the sheetrock etc does it pose any harm.

In the days of lead pipes, people didn’t know lead was bad for you, and homes used to use lead because we at least knew it wouldn’t 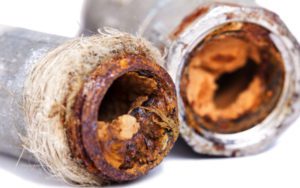 corrode. Heck, they even used to paint with it, and now we agents have to have clients sign a lead-based paint disclosure form for old homes. Then as people figured out lead was not a good option, came galvanized steel which at the time was a great system. Unfortunately, over time even though galvanized means the steel was treated so it wouldn’t corrode, over time it eventually does. The issue arises when you buy a home that has not replaced the mainline (usually the issue), coming into the home. If that has not been done then you need to account for that in your price because you’ll definitely want to have it done and it can be expensive as crews have to dig up your yard, sometimes driveway, the street, tear trees down – who knows. Because they have to take the entire pipe from the city line to your house and replace it with PVC.

In short, this is why you hire an EXPERIENCED agent. Not your friend who just got her license, or your buddy who does it part-time but is a school teacher full time. Would you hire a part-time doctor to do your surgery or want a surgeon who is always practicing and working with the latest know-how?

Almost exclusively found in the states of Connecticut and Massachusetts there was a stretch of homes up to the tens of thousands that were built using a bad mixture of concrete. The problem is unfortunately familiar in Connecticut, where some 34,000 homeowners are thought to be affected: home foundations are failing because stone ground up to make the concrete contains the mineral pyrrhotite. Over time, the iron sulfide in the pyrrhotite reacts with oxygen and water, making the concrete crack and swell.

According to reports issued by the state of Connecticut over the past two years, a company called Becker Quarry in Willington sold the pyrrhotite-contaminated stone to the now-defunct JJ Mottes concrete company from 1983 until 2017, when they agreed to stop. Unfortunately for homeowners, it takes 10, 15, or even 20 years for the cracking and swelling to become apparent so many did not know until it was too late.